I saw this pattern and was perhaps fooled by the picture.  It felt dreamy and summery and I bought it.  Soon after I happened upon this ombre purple fabric, it was just a small rem.  I thought it would work great with this pattern.  I meticulously placed the pieces so that the ombre look wouldn’t be lost.  The construction went well and I felt really good about it until I put it on. 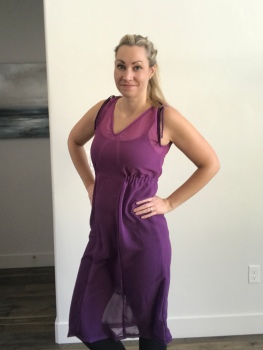 I am not impressed.  Obviously, it’s a shear and so I had planned on making a shell dress to go under it, but I was so underwhelmed that I’ve abandoned the project to the donation bin.

What can I say?  So many things can go wrong in sewing: the fit, the fabric, the construction . . . Sometimes the vision just doesn’t meet the result.  I have to remind myself that most good artists rarely display their flops.  Until next time!